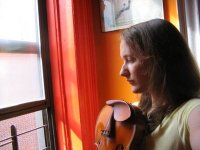 Violinist Amie Weiss enjoys a diverse performing and teaching career that has enabled her to collaborate with artists from many areas of the world and across varied disciplines.

Based in New York City between 2004-2009, Weiss participated in chamber music, orchestral, pop and new/experimental music projects. She joined The Knights Chamber Orchestra and co-founded the Caravel Quartet, now ensemble-in-residence at Manhattan's Museum of Biblical Art (MOBIA). She collaborated with pop artists such as Sufjan Stevens, DJ A Trak, Teddy Thompson and Nina Nastasia, visual artist Pierre Hughye; and recorded on Sony Classical, Asthmatic Kitty Records, Fat Cat, Koch, 12K and Tzadik labels. Weiss also toured internationally as soloist with Bill T. Jones/Arnie Zane Dance Group and in the USA with Mark Morris Dance Group. In improvisational settings, she played with the Walter Thompson Soundpainting Orchestra and the band Imaginary Folk. She also participated in the 2004 Carnegie Hall Professional Training Workshop with Yo-Yo Ma and the Silk Road Ensemble; an investigation of music from the crossroads of Asia, the Middle East and Europe.

In 2009, Weiss moved to Barcelona to pursue a postgraduate degree in early music at La Escola Superior de Música de Catalunya (ESMUC). She subsequently joined the conductorless Italian chamber orchestra Spira Mirabilis for projects in Italy and Germany, played in Amsterdam with the Nederlands Kamerorkest and in France with the baroque ensembles Café Zimmermann and Jeune Orchestre Atlantique. She also toured with the Sarasa Baroque ensemble of Boston. In addition, Weiss was selected as one of 6 international performing arists for the 2010 Résidences aux Récollets in Paris, a 3-month artist residency provided to foreign artists by Le Mairie de Paris, during which she prepared material for a recording of French music on historical and modern instruments.

Weiss graduated from Oberlin Conservatory as a student of Milan Vitek and received a Postgrado in historical violin at ESMUC under the tutelage of Pablo Valetti. At Oberlin, she also began exploring improvisation and conceptual music and studied Hindustani music with sitarist Hasu Patel.

As an educator herself, Weiss' work has taken various forms. She was a member of the Toomai Quintet in NYC, a group selected to participate in Carnegie Hall's Musical Connections program, giving concerts in hospitals and other under-served communities around the city. She performed at remembrance ceremonies for victims of ethnic genocide, Broadway Cares AIDS benefit shows, in hospitals and pyschiatric care facilities, under-resourced urban and rural schools around the country and a juvenile detention center in Boston. She was instructor of violin at the 92nd St. Y for 2 years, has served as adjudicator for the NJ Youth Symphony Orchestra auditions and coached chamber music at the Diller-Quaille School in Manhattan and in Catalunya, Spain. She has also given string masterclasses at the University of Tennessee Chattanooga and Birmingham Southern College. From January-September, 2011, she will join the Al Kamandjâti Conservatory in Ramallah, Palestine, as an instructor of violin throughout the West Bank.

The 2010-11 season also features a tour of Germany with The Knights, performance at Musikfest Bremen with Spira Mirabilis and concerts with the Caravel Quartet at MOBIA, Byrdcliffe Art Colony, Irvington Library and the Ukranian Cultural Institute of New York. Weiss will also perform the Sibelius violin concerto in San Pedro Sula, Honduras, as part of a music festival under the direction of Mario Alejandro Torres.