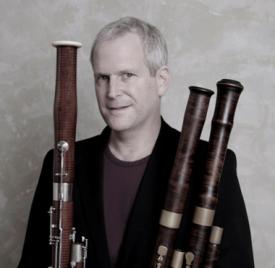 Bassoonist ANDREW SCHWARTZ has appeared throughout the world as a soloist, chamber musician, and orchestral player. Mr. Schwartz has performed solo concertos in some of the world’s great concert halls, including Boston’s Jordan Hall, Alice Tully Hall in New York, and Vienna’s Musikverein. He is a member of the New York Chamber Soloists, The Little Orchestra Society, and the Scandia Orchestra in New York, and has performed regularly with the Metropolitan Opera and the Orchestra of St. Luke’s. One of the most prominent musicians playing historical bassoons, Mr. Schwartz is principal bassoon for the leading period instrument organizations: Handel & Haydn Society, Boston Baroque, The American Classical Orchestra, Sinfonia New York, Rebel, Concert Royal, Washington, D.C., Bach Consort, and Musica Angelica in Los Angeles. His many recordings include Mozart’s Da Ponte operas and The Magic Flute, as well as the complete works for wind ensemble on the Decca/L’Oiseau Lyre label.