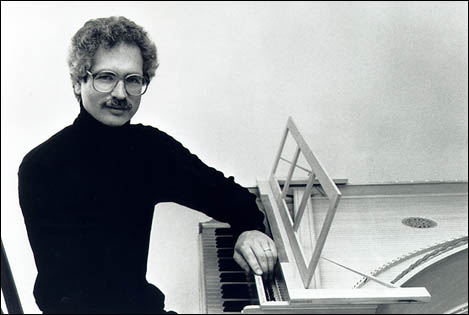 Arthur Haas, harpsichordist, is one of the most sought-after performers and teachers of Baroque music in the U.S. today. He holds a master’s degree in historical musicology from UCLA, where he studied harpsichord with Bess Karp. He also studied with Albert Fuller at The Juilliard School and with Alan Curtis in Berkeley and in Amsterdam.

Mr. Haas was awarded the top prize in the Paris International Harpsichord Competition in 1975, and then lived for a number of years in France, performing in many of the major European early music festivals and teaching at the Ecole Nationale de Musique in Angoulême. While in Paris, he joined the famed Five Centuries Ensemble, known for its performances and recordings of both early and contemporary music. In 1985, his formal American debut at Lincoln Center’s Alice Tully Hall was highly praised by the New York Times.

He is a member of the Aulos Ensemble, one of America’s premier early music ensembles whose recordings of Bach, Vivaldi, Telemann, and Rameau have received critical acclaim in the press. He is also a member of Empire Viols and Aula Harmoniæ. Mr. Haas participated in the first recording of the Bach Goldberg Variation Canons with Alan Curtis, and has also recorded suites for two harpsichords by Gaspard LeRoux with William Christie. His solo CD’s of Pièces de clavecin by Jean-Henry D’Anglebert, Suites de clavecin of Forqueray, music by Henry Purcell and his contemporaries, and suites of Jacquet de la Guerre and François Couperin have been widely praised in the press.

Known for his expertise as a continuo player, Mr. Haas has toured with such distinguished early musicians as Marion Verbruggen, Jaap ter Linden, Julianne Baird, Laurence Dreyfus, Bruce Haynes, and Wieland Kuijken. In 2001, he recorded Bach’s Cantata 199 and songs of Henry Purcell with the soprano Dawn Upshaw.

Annual summer workshop and festival appearances take him to the International Baroque Institute at Longy, and the Amherst Early Music Festival, where he has served as artistic director of the Baroque Academy since 2002. Mr. Haas is professor of harpsichord and early music at Stony Brook University, where he directs the award winning Stony Brook Baroque Players, and is also on the faculty of the Mannes College of Music and Juilliard’s recently created historical performance program. In Fall 2012, he will begin teaching harpsichord and early music courses at the Yale School of Music.