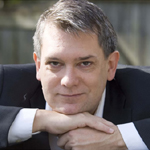 As a solo harpsichordist, Brookshire has distinguished himself with an ongoing series of recitals encompassing all of J.S. Bach’s works for solo harpsichord. Concert Four of that series (Merkin Concert Hall, Jan. 20, 2001) presented the Fantasias and Fugues of Bach. Of Concert One (“The French Suites”), James Oestreich of The New York Times noted, “Can it be that simple? One of the things the New York music scene has needed most desperately is an excellent Bach harpsichordists. It has every reason to believe it has found one. Just like that...fine technical aplomb, backed by wonderful musicality, personality and wit...a tour de force.”

A pioneer in the union of early music and current technology, Brookshire (in conjunction with Purchase faculty members James McElwaine and Satoshi Arai) has initiated a new tradition of live, multimedia presentations of Bach’s works. This approach to the contrapuntal intricacies of Bach’s music projects a streaming video in open-score format. Contrapuntal devices are made clear by a running analysis, complemented by a rendering of the themes in contrasting colors. Mr. Brookshire tours widely with this presentation, bringing Bach’s music to audiences outside the mainstream of concert life: a recent performance (and a good example of his target audience) was held at the international headquarters of IBM, where the concert was presented to a live audience and, via the Internet, to the entire IBM community worldwide.

In January 2001, Mr. Brookshire released a new recording of the complete “French Suites” of Johann Sebastian Bach, which was nominated for a 2001 Grammy Award. Of one “Art of Fugue” presentation, music writer Francis Brancaleone observed, “Harpsichordist Bradley Brookshire gave a well-informed performance of this enormously complex work...[His] realization and performance were a model of thoughtful, musical exploration. He easily brought the musical design to expressive life. Dance movements danced and the pedagogical intent of serious movements was clarified through articulation and rhythmic inflection.” “Brookshire’s manner masks a facile technique which he always seems to use in the service of Bach. He does not get in the way of the music but rather elucidates it through his interpretation.“ “This special event was a memorable opportunity to experience Bach’s great work in a unique way.” (“Bach gets some help from the modern age” - The Journal News [Gannett], April 3, 2001)

Mr. Brookshire is also a noted conductor of baroque opera. His controversial 1995 Vox Classics recording of Purcell’s “Dido and Aeneas” has become a standard alternative reading of the classic. The Philadelphia Inquirerdescribed Mr. Brookshire’s direction as “forceful and colorful,” while theNewark Star-Ledger cited the recording as “compelling, even frightening in the Storm Scene, in a way not thought possible of period instrument performances.” The British periodical Musica! noted, “Jennifer Lane’s Dido is broadly played and sung, perfectly complementing the intense playing of Bradley Brookshire’s I Musici di San Cassiano.” (March, 2001)

In May of 1998, Brookshire led staged performances of Handel’s “Esther” in New York City: “conductor Bradley Brookshire [was] superb“ (Opera News); “a gifted music director“ (New York Newsday). When he conducted the Mannes Camerata in New York, they were described as “...assured and stylish...the Camerata has become confident, and there was shapely singing from all...a septet of strings, directed at the keyboard by Bradley Brookshire, provided supple accompaniment” (Andrew Porter, The New Yorker). He has served as Assistant Conductor at Glimmerglass Opera, Cover Conductor at Virginia Opera, and has twice conducted concertante performances at the New York City Opera.

Bradley Brookshire has taught at Yale University, where he led the Collegium Musicum; at Mannes College, where he led the Mannes Madrigal Singers; and at the Escuela Nacional de Musica in Mexico City, where he has mounted several concertante performances of baroque operas. A member of the Purchase College Conservatory of Music faculty since 1998, Brookshire holds the position of Director of Graduate Studies and leads the Purchase College Camerata. His other academic work includes a paper entitled “Varied Reprises in the Keyboard Music of Johann Sebastian Bach,” read in the 1990 Spivey International Keyboard Symposium in Atlanta, and a speculative reconstruction of three scenes from Monteverdi’s lost opera, “Arianna.” He is currently at work on a paper that questions the validity of performance of Monteverdi’s “L’incoronazione di Poppea” without significant reconstruction of the original Venetian lineaments, which, he posits, have been obscured in the surviving sources.