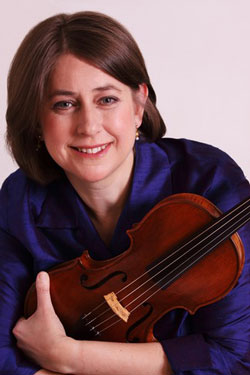 Violinist Claire Jolivet has rapidly established herself as one of the country’s leading interpreters of baroque and early classical repertoire. She maintains a busy career appearing regularly with chamber ensembles and orchestras throughout the Northeast, including Sinfonia New York, Sarasa, Repast, Concert Royal, Clarion, and Ars Antiqua.

She is a member of the newly-founded Dodd String Quartet. She was for many years a member of the Four Nations Ensemble, with whom she appeared to critical acclaim on major concert stages in the US and abroad. She is the concertmaster of Opera Lafayette in Washington DC and of the New York based Grand Tour Orchestra. She has also performed as a guest with Musica Pacifica, Piffaro, Tafelmusic, the Orchestra of the Age of Enlightenment, and with Opera Fuoco in Paris.

On modern violin, Ms. Jolivet freelances in the many orchestral ensembles in the New York area, such as the Stamford Symphony and the Orchestra of St. Lukes. She has appeared as violin soloist with the Jacksonville Symphony Orchestra.

As a chamber musician, she has collaborated with such distinguished artists as Joseph Kalichstein, Paula Robison and Kathleen Battle. Ms. Jolivet was the founder and Artistic Director of the Crested Butte Chamber Music Festival in Colorado, an organization she steered for over 10 years.

She began her violin studies in England with Pamela Spofforth and is a graduate of the Juilliard School where she studied with Dorothy DeLay.

She has recorded on the Deutsche Harmonia Mundi and ASV - Gaudeamus labels.