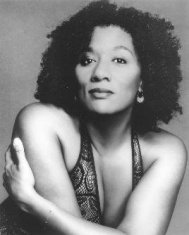 Singer/Composer, Dana Hanchard is likely to show up anywhere in a myriad of musical constellations. Music has brought her to serve on several continents, appearing at concert halls, nightclubs, opera houses and jazz festivals alike.

Dana began her career in music  in baroque and contemporary classical music as a soprano soloist.  Throughout the 1990's, She performed and recorded operas of Handel, Monteverdi and Meredith Monk and Cantatas of J.S.Bach and Music of the Mexican and South-American baroque period (see labels for recordings: ECM, Deutsche-Grammaphon/Archiv, Harmonia Mundi,Erato, Lyrichord). During this period of her career she worked with many conductors of the day, Nicholas McGegan, Sir John Eliot Gardiner, Michael Tilson Thomas, Jane Glover, Reinhard Goebel to name a few.

When the invitation came to start up a voice program in Japan, it was an opportunity that allowed her to focus her efforts more in song writing and in musical projects of her own.  Her band, the Dana Hanchard Group has been performing in Japan since 2003 playing her originals at Jazz clubs in Tokyo and Yokohama. She has done concert performances of her music around the U.S, Japan and the Middle East.

Her latest recording, of all original music, ‘Fool Tale Spinning’ was released in 2009 on her own Fertile Ground Music label (FGM/Aodoa). Previous recordings on this label include 'Dana Hanchard', the first CD of her original works and 'Once Canciones de Diego Luzuriaga'. The label Fertile Ground Music was initally started in order to provide a vehicle to distribute the work of this  modern Ecuadorean composer whose songs she loved to sing and wanted to make more available to others.

In recent seasons, Dana can be heard on Japanese nationwide live television broadcasts for NHK and Skyperfect TV, Jazz at Lincoln Center in NYC with the NY festival of Song , Ravinia jazz festival in Chicago with Rufus Reid quintet plus four, Kioi hall in Tokyo with marimbist, Momoko Kamiya and as a soloist at the 2008 opening of the Article 9 conference to Abolish War held in Chiba Japan.

She has made solo guest appearances in concert and for Japanese television. Her voice and music can be heard several days a week on the morning program RadiyogaTV for BS Fuji Television. This is the culmination of a yoga and music project developed with Ken Harakuma, director of the Tokyo International Yoga center with whom she has been doing ‘Radiyoga’ workshops for several years now. Dana spends her time between NYC and Kawasaki where she helped to design and establish a vocal course at the Senzoku Gakuen Jazz College in Yokohama