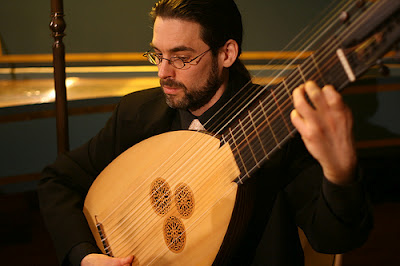 Lutenist Daniel Swenberg concentrates on Renaissance and Baroque performance practices--with special devotion to the role of basso-continuo playing and the instruments central to its practice: the theorbo/chitaronne, renaissance and baroque lutes, early guitars, and the gallizona/callichon.

Recently, he has accompanied Renee Fleming at the MET, Carnegie Hall, and on Live from Lincoln Center, with the Mostly Mozart Festival, and was on staff at the inauguration of the Aspen Music Festival's baroque mini-festival.

He has received awards from the Belgian American Educational Foundation (2000) for a study of 18th-century chamber music for the lute, and a Fulbright Scholarship (1997) to study in Bremen, Germany with Stephen Stubbs and Andrew Lawrence King, at the Hochschule fuer Kuenste.

He studied previously with Pat O'Brien at Mannes College of Music (New York City), receiving a Masters Degree in Historical Performance-Lute. Prior to his concentration on lutes, he studied Musicology at Washington University (St. Louis) and received a B.M. in classical guitar from the North Carolina School of the Arts.