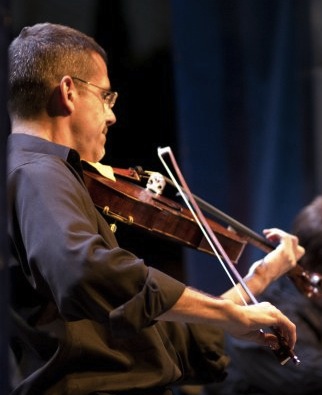 David Cerutti performs internationally as violist and violist d’amore. A resident of New York, he is co-principal violist with the Orchestra of St. Luke's and member of the St. Luke's Chamber Ensemble.  He appears regularly in the U.S. and abroad with the Metropolitan Opera Orchestra, Orpheus, and has been a guest soloist on the Double Exposure series at the Chamber Music Society of Lincoln Center.

A former member of the Smithson String Quartet, he is a founding member of the Serenade Orchestra, Trigon, and has been guest artist with the Brentano String Quartet, the Cygnus Ensemble, and the Elements Quartet. He collaborated with members of Archibudelli on a recording of the Mendelssohn and Gade string octets, for the Sony Classical label. His unedited performance of Bach’s Sixth Brandenburg Concerto was chosen by National Public Radio as one of seven best live recordings of Bach from “Performance Today,” and was subsequently released as a CD.

In spring of 2012 he will be featured on viola d'amore in the Metropolitan Opera's production of Leos Janacek's The Makropoulos Case.