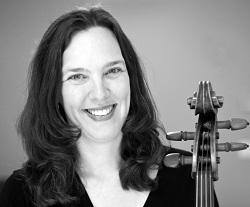 Elisabeth Reed is Co-director of the Baroque Ensemble at the San Francisco Conservatory of Music where she teaches baroque cello and viola da gamba. In demand throughout the country as a chamber musician and soloist, she is a member of the American Bach Soloists, Voices of Music, and Wildcat Viols. She has also appeared with the Seattle, Portland, and Philharmonia Baroque Orchestras, and, at the Boston and Berkeley Early Music Festivals as well as the San Luis Obispo Mozart Festival.

A graduate of the North Carolina School of the Arts, the Oberlin Conservatory, the Eastman School of Music, and Indiana University's Early Music Institute, she can be heard on the Virgin Classics, Focus, and Magnatune recording labels. She also teaches baroque cello and viola da gamba at the University of California at Berkeley and the American Bach Soloists Summer Academy and is a Guild-certified practitioner of the Feldenkrais Method of Awareness Through Movement, with a focus on working with musicians and performers.