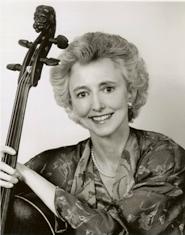 Enid Sutherland, cellist, violist da gamba, and composer, earned undergraduate and graduate degrees in cello and composition at the University of Michigan. Her long career as a performer, teacher, and student of historical performances practices has taken her on a musical journey from the music of the Renaissance through that of the early Romantics. She  attracts  students from all over the country to her studio in Ann Arbor. In addition to her many solo performances, she has performed with a number of ensembles, including the Ars Musica Baroque Orchestra, the New Baroque Trio, Musicke of Sundrie Kindes, the Oberlin Baroque Ensemble, the Ensemble for Early Music of New York, Apollo’s Fire of Cleveland, Tafelmusik of Toronto, and the Detroit Symphony Orchestra. Since 1990 she has been a member of the Atlantis Trio (Jaap Schröder, violin, and Penelope Crawford, fortepiano), which has already released the Complete Works of Schubert for Piano Trio on the Wildboar label. For Musica Omnia, the music for piano and chamber ensemble by Felix Mendelssohn, piano quintets of Schubert and Schumann, and piano trios of Fanny Mendelssohn, Robert & Clara Schumann and Sigismond Thalberg have been recorded. As a composer, Enid Sutherland has written numerous works in modern idioms for small to medium mixed ensembles, solo pieces for various instruments, two song cycles, duos for violin and cello, two harpsichords, and harpsichord and piano, and one opera. She has received several commissions, and her works have been performed across the United States and in Europe. She has also been awarded grants for her work from the Ford Motor Company, the University of Michigan, and the American Music Center.