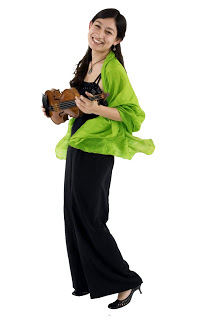 Acclaimed by the New York Times as a "deeply expressive violinist," Harumi Rhodes is gaining broad recognition as a multifaceted musician with a distinctive and sincere musical voice. Her generosity of spirit on stage is contagious, making her one of the most sought after violinists and chamber musicians of her generation. Recent solo engagements include performances of Bernstein's Serenade, Beethoven's Violin Concerto, Mozart's Violin Concerto No.5, and Vivaldi's "Four Seasons" with the Vermont Mozart Festival Orchestra.

In addition to her career as a founding member of the Naumburg Award winning ensemble, Trio Cavatina, Ms. Rhodes was named the newest Artist Member of the Boston Chamber Music Society in 2009. As an avid supporter of contemporary music, Ms. Rhodes performs regularly with Music from Copland House, and has recorded Milton Babbitt's Sixth String Quartet on John Zorn's Tzadik label. While completing her residency with Lincoln Center's Chamber Music Society Two, she also participated in several summer festivals including Marlboro, Mainly Mozart, Bard, Bridgehampton, Caramoor, and the Saito Kinen Festival in Japan. A graduate of the Juilliard School and the New England Conservatory, her principal teachers were Ronald Copes and Donald Weilerstein.

Ms. Rhodes has served as Assistant Violin Faculty at the Juilliard School since 2010, and has most recently been appointed Professor of Violin at Syracuse University for the 2012-13 academic year.