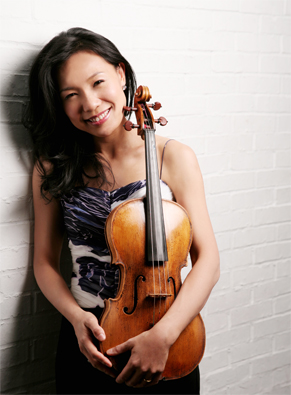 Violist HSIN-YUN HUANG, recognized as one of the leading violists of her generation, came to international prominence in 1993 when she was winner of the top prize of the ARD International Music Competition in Munich and the Bunkamura Orchard Hall Award. In 1988, Ms. Huang was the youngest-ever Gold Medalist of the Lionel Tertis International Viola Competition on the Isle of Man. These and other honors have propelled a career as soloist and chamber musician on stages of major concert halls throughout North America, Europe, and the Far East.

Recent highlights include concerto appearances with the City of London Sinfonia; the Amarillo Symphony; the Naumberg Orchestra in New York City's Central Park and the Dalbavie Viola Concerto with the ICE a Miller Theater in New York City.  George Benjamins Viola Viola with violist Misha Amory for Carnegie Halls Making Music series at Zankel Hall and a part of Elliot Carter's Celebration of his 100th Birthday at Zankel Hall. Other solo performances have included concerto appearances with the Bavarian Radio Orchestra in Munich, the Zagreb Soloists in Paris, the Tokyo Philharmonic in Tokyo, the Berlin Radio Symphony in Berlin, the Russian State Philharmonic, the  National Symphony of Taiwan, the Taipei City Symphony and with the Evergreen Symphony Orchestra.

Ms. Huang has collaborated with many distinguished artists, including Yo-Yo Ma, Jaime Laredo, Joshua Bell, Joseph Suk, Menahem Pressler to name a few. Recent collaborations include performances with the Guarneri, the Juilliard, the Orion, the Brentano and the St. Lawrence String Quartets.

Ms. Huang has recently embarked on a series of major commissioning projects for solo viola and chamber ensemble. In July 2006 she premiered a new work from Houston-based Taiwanese composer Shih-Hui Chen, Shu Shon Key (Remembrance) with the Broyhill Chamber Ensemble at An Appalachian Summer Festival in North Carolina. The work was co-commissioned by the festival along with Da Camera of Houston and the Chinese Performing Arts. The Evergreen Symphony Orchestra has commissioned a version of the work for solo viola and orchestra which received its world premiere in Taipei in 2008.

A new work from Steven Mackey, also for solo viola and chamber ensemble, was premiered at the Aspen Music Festival in the summer of 2007. Subsequent performances will include presentations by the Fulcrum Point New Music Project in Chicago, the La Jolla Summer Festival, Salt Bay Chamberfest and at Princeton University.

Ms. Huang was a member of the Borromeo String Quartet from 1994-2000. With the Quartet, she performed in such prominent venues as New York Citys Alice Tully Hall, London’s Wigmore Hall, Berlin's Philharmonie, and Japan's Casals Hall. In 1998 the Borromeo String Quartet was awarded the prestigious Cleveland Quartet Award, chosen by the Chamber Music Society of Lincoln Center to be members of Chamber Music Society Two, and featured in a Live from Lincoln Center telecast.

Hsin-Yun Huang came to England at the age of fourteen to study at the Yehudi Menuhin School with David Takeno. She continued her studies at the Curtis Institute with Michael Tree, and at the Juilliard School with Samuel Rhodes. Currently residing in New York City, she is a dedicated teacher, serving on the faculties of The Juilliard School and the Mannes College of Music and has given master classes at Guildhall School in London; Curtis Institute; the Juilliard School; the McDuffie Center for the Strings the Taipei Normal University and the East Carolina University.